Evans developed and quantitatively proved a new cooling technology by eliminating the use of water. The company has made coolants for the last 25 years, and have 21 issued U.S. patents and over 40 foreign patents. The new coolant, EVANS Non-Aqueous Propylene Glycol (NPG), has an efficiency that is considerably superior to conventional coolants and has a boiling/vaporization point considerably higher than conventional water-based coolants. The end result is greater thermal efficiency and fuel mileage while at the same time reducing detonation, pre-ignition emissions and wear. Better yet, EVANS NPG Coolant is essentially non-toxic, non-corrosive, and operates with zero pressure.

Within an engine cooling system the hottest surfaces are those adjacent to the combustion chamber, specifically the cylinder liners and cylinder head. In these areas EG-Water mixtures regularly cross the thermal boundary that separates efficient Nucleate Boiling (B in the picture below) from inefficient Critical Heat Flux (CHF).

CHF is synonymous with the condition Departure from Nucleate Boiling (DNB). When DNB occurs in an engine cooling system a film of steam bubbles form adjacent to the engine hot-spots (See picture below). Because steam dissipates less than 1/30th of the heat that water does, local metal temperatures over-heat rapidly. This leads to a viscous cycle of over-heating.

This over-heating and excessive thermal stress leads to several problems including; 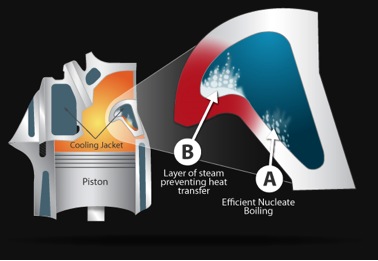 Chemical limitations of water based coolants

Although water is cheap and readily available, it is also the root cause of corrosion within engine cooling systems.

Water when heated drives off a significant proportion of dissolved oxygen, but as it cools reabsorbs fresh oxygen. This cycle leads to a perpetual cycle of corrosion, which is accentuated in classic vehicles with no expansion chamber.

Water also acts as an electrolyte if dissolved solids, such as hardness salts (lime scale) etc., are present. This promotes galvanic corrosion where metals of high nobility sacrifice themselves metal of low nobility – often manifested by pitting.

Corrosion inhibitor formulations have changed many times over the years, but not always for the better. Nitrite, silicate, borate and azole based products have been around for many years, with Organic Acid Technology (OAT) inhibitors appearing more recently. OAT formulations are often branded as ‘Long-Life’ based on their five year life-span, compared with 1-2 years for standard antifreeze formulations.

Although OAT-EG-Water mixtures are now used in most new car engines, they have proven less successful in older vehicles and heavy duty diesel engines (HDDE). After several years of trying OAT based products many HDDE OEMs and fleet operators reverted to nitrite and/or Hybrid OAT (HOAT) formulations. One reason for this u-turn was that OAT formulations offer little protection against liner pitting.

To maintain effective inhibitor levels it is often necessary to retro-dose with Supplemental Coolant Additives or SCAs. It is common for SCA’s to be under or over dosed leading to accelerated corrosion rates, cylinder liner pitting or blocking up of radiator channels with congealed inhibitor.